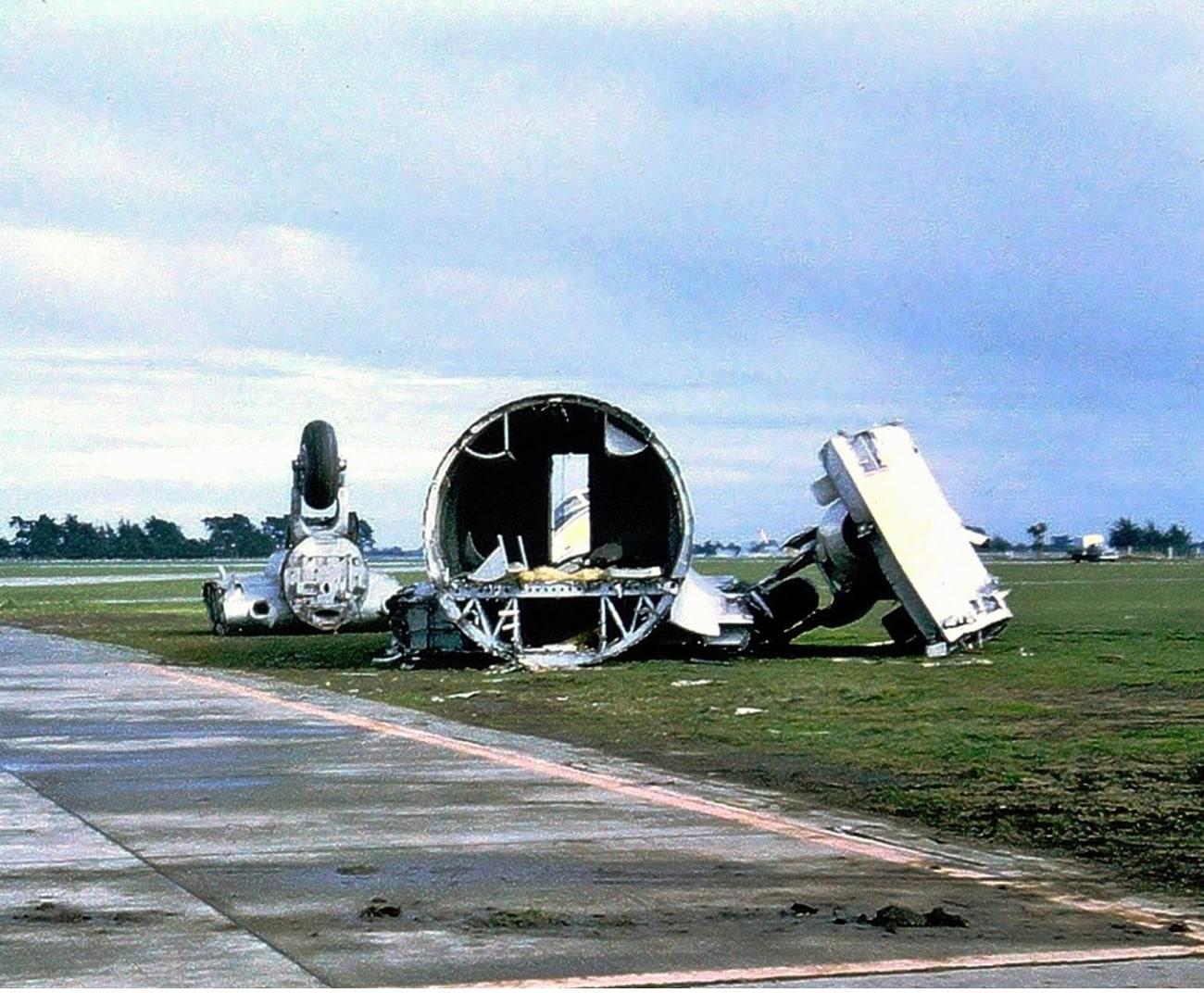 RNZAF Hastings in service – The RNZAF operated four Handley Page (HP) Hastings (serial numbers NZ5801 to 5804) CMk3 four-engined transport aircraft from 1952. These aircraft were flown initially by No. 41 Squadron, but they were transferred to No. 40 Squadron when it reformed on 8th December 1954.

The Crash of Hastings NZ5804 – RNZAF Hastings CMk3 NZ5804 crashed and was written off when three engines failed after the aircraft hit a large flock of birds on takeoff from Darwin, Australia, on 9th September 1955.

The remaining three Hastings served New Zealand well in long distance air transport operations throughout the 1950s until they were retired from service in 1966, after replacement aircraft had been introduced by the RNZAF.

DC6 in the RNZAF – The Douglas DC6 passenger aircraft was also part of the RNZAF’s early-1960s long distance air transport solution when three former Tasman Empire Airways Limited (TEAL) DC6 aircraft were introduced to RNZAF service: NZ3631 first flew RNZAF transport operations on 29th June 1961 and remained in service until 1968; NZ3632 was in RNZAF service from 1961 until 1964; and, NZ3633 was in service from May 1961 until May 1964.

Enter the C-130H Hercules – The first three of the new RNZAF C130H Hercules transport aircraft, NZ7001, 02 and 03, arrived in Wellington, New Zealand, on 14th April 1965. In the next six months, the C130s ‘worked-up’ and began to undertake tasks formerly carried out by the Hastings with a resultant reduction of tasks for the Hastings.

Withdrawal of the Hastings – Finally, the remaining three of the original four Hastings were withdrawn from service and were flown to Ohakea in early 1966 to be placed into long term storage. Hastings NZ5801 was the last to arrive at Ohakea on 2nd February 1966.

Storage of the Hastings – Initially the three remaining Hastings were stored inside No 42 Squadron’s No 3 Hangar at Ohakea, along with 42 Squadron’s Dakotas and Harvards. However, concrete masonry (spalling) started to fall from joints in the Hangar’s domed concrete ceiling high above. In order that repairs could be made to the Hangar ceiling, the Hastings were towed out and positioned on the grass area at the western edge of the airfield, which was just across the high wooden boundary fence from Flying Officer (Fg Off) Jim and Mrs Joanie Barclay’s rented RNZAF MQ43 ‘Transit Flat’ cottage at Ohakea.

Abortive Plans to fly a Hastings to Auckland – One of the Hastings, NZ5801, had been gifted by the RNZAF to the Museum of Transport and Technology (MoTaT) located at Western Springs in Auckland, but the problem was how to get it there from Ohakea. Even with the engines, wings and tail fin removed, the Hastings was too big to be taken by road, or through rail tunnels, so a plot was hatched in 1967 by a former Hastings pilot, and at that time the Base Commander at Ohakea, Wg Cdr G.H.S (Toz) Tosland AFC and Bar. ‘Toz’ said he would fly the old NZ5801 workhorse to Whenuapai from whence it could be towed by road to MoTaT; and as the self-appointed aircraft captain for the flight, Toz found enough other volunteer crew members to make the trip possible. Accordingly, detailed plans were made to service the four engines on the Hastings and carry out other essential maintenance; but, it was not to be as the whole idea was scrapped by the ‘powers that be.’ So NZ5801 stayed at Ohakea, meantime.

Farewell to Toz – On 28th September 1967, Hastings NZ5803 was used as the temporary venue for a social occasion.  Officers and their ladies from Ohakea stood on the steeply sloping floors of the Hastings to enjoy a tipple to farewell Wg Cdr and Mrs Tosland on their retirement from the RNZAF. The Base Band played outside the Hastings while drinks were served inside the aircraft from 1845 hours till 1930 hours (6.45pm until 8.30pm), after which an “informal formal dining in” was held to farewell the Toslands at the Officers Mess. ‘Toz’ was joined for the evening by some former Hastings aircrew including Wg Cdr A.G.E. ‘Butch’ Pew who was a former RNZAF Wireless Operator/Air Gunner with 75 Squadron in World War Two. After the war, Butch served as a Wireless Op/Signaller with ‘Toz’ on the Hastings where Butch worked his magic with the long range High Frequency (HF) radio used for both voice communications and Morse code.

Hastings to be scrapped – The monthly Journal of the Aviation Historical Society of New Zealand (Volume 11, Number 2, No 119, of 4th March 1968) reported “RNZAF Hastings may be scrapped. This was a newspaper headline on 8 January. The three aircraft were last flown in February 1966 and have been in storage ever since at Ohakea. The future role of these Hastings has been under review for some time, and it is to be discussed again soon. The Hastings were replaced in the RNZAF by C-130H Hercules.”

The Battle of Hastings 1969 – When the decision was finally made to dispose of the two of Hastings, NZ5802 and NZ5803, my wife Joanie and I had close-up ringside seats from May 1969 of the doomed aircraft as they were literally cut up for scrap just outside our front door. As the scrap metal contactors worked, they systematically chopped the aircraft into sections to be carted away by road to be melted down – the chopping process was just as a chainsaw would be used to chop a log of wood into sections.  I recall the Base fire engine coming out a number of times to put out fires in the now derelict Hastings, particularly from the wings and fuel tanks, as the contractors rushed headlong through their demolition job with seemingly scant regard for their own safety from the danger of fuel fed flash fires.

Looking at the photo below of the remains of a Hastings showing one severed main wheel in the air, the other at a crooked angle, and with a small part of the fuselage centre section between them, you can see through what was once the doorway into the cockpit. Through that doorway you can see what I believe to be some of the glass cockpit windows and part of the nose section of that Hastings. A similar portion of nose section from Hastings NZ5801 is now on display at the MoTaT in Auckland.

The Battle of Hastings 1971 – After the plans made in 1967 by Wg Cdr ‘Toz’ Tosland to fly the ‘MoTaT’ designated Hastings NZ5801 to Whenuapai were dropped, the aircraft sat on the grass at the western edge of the airfield at Ohakea and there it continued to deteriorate in the elements.  I imagine a point was finally reached when the RNZAF directed MoTaT to remove the Hastings from Ohakea.

The Air Force Museum of New Zealand Facebook site records (on 27th April 2017) “In early 1971 the last RNZAF Hastings, NZ5801, was broken up at Ohakea. Ten people from MoTaT stayed on Base while the dismantling was carried out. The front 22 feet of the fuselage, the engines and numerous smaller components were salvaged and transported to Auckland by road using Army trucks.  The parts salvaged are still in the collection of MoTaT in Auckland.”

And so endeth the tale of the ‘Last Battles of Hastings’.