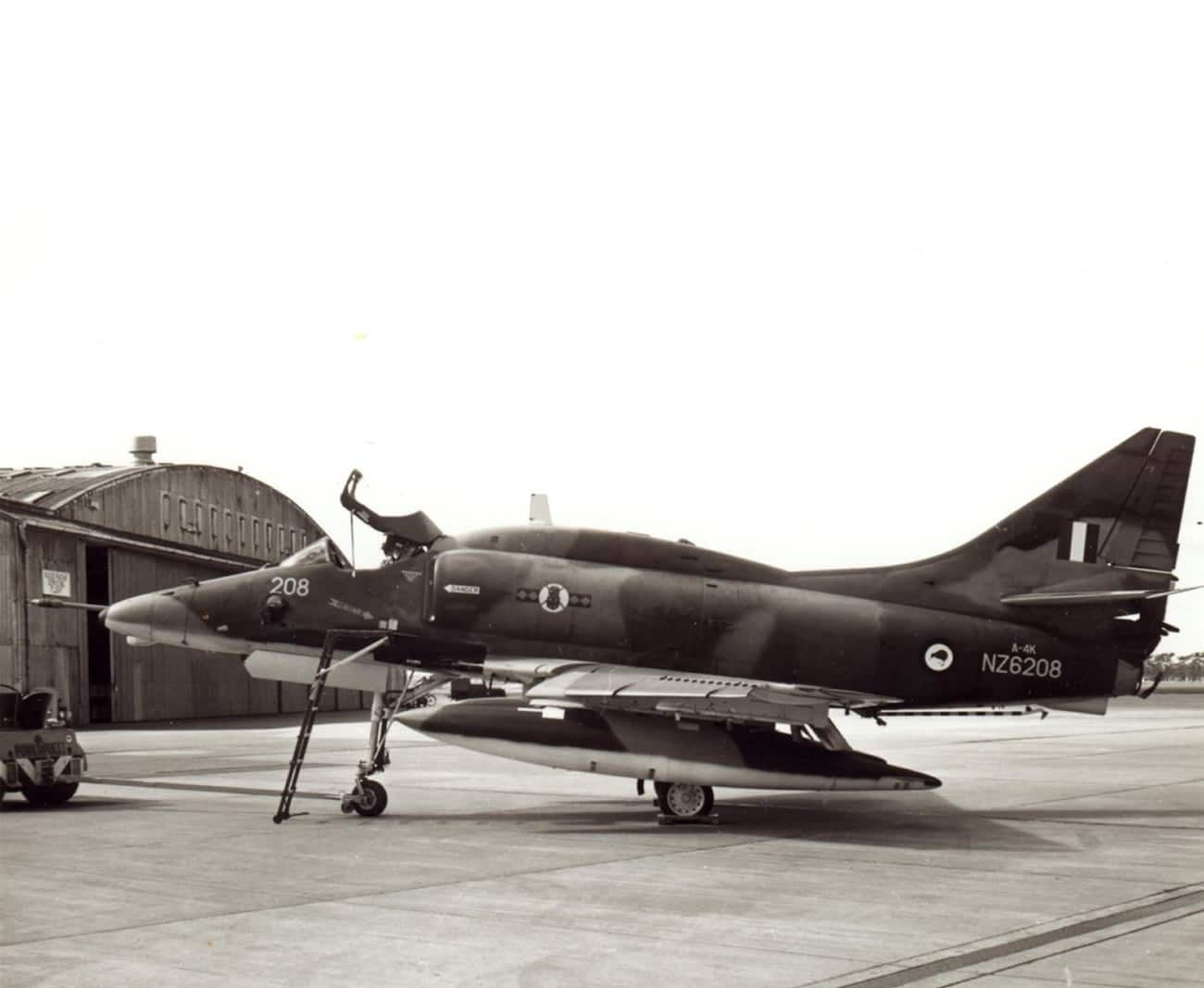 A4 painted drop tanks – what some may think is ‘useless’ information – a photo of Skyhawk A4K NZ6208 at Ohakea carrying the first set of drop tanks with camouflage paint applied to the top part of the tank. Since we had had the Skyhawks in 1970 the drop tanks had always been white; and when viewed by a ‘bandit’ from above, these white tanks effectively highlighted and gave away the otherwise camouflaged Skyhawk.  So, a bid was made to the ‘powers-that-be’ to have the top two thirds of the tanks painted in camouflage and thus disguise the overbearing  white tanks.  As further drop tanks were painted they were progressively added to Skyhawk aircraft. Until all tanks were painted there were times when some aircraft carried a mixture of ‘camo-painted’ painted and unpainted white tanks. The same happened in the mid-1980s when the new ‘green’ camouflage paint was applied to wrap around the whole tank and some aircraft again carried tanks in a variety of colours. To busy groundcrew,  a fuel tank was a fuel tank, never mind the aesthetics!

The Gun-Bay Flash Fire – I carried a test flight on 16th May 1973 in RNZAF Skyhawk A4K NZ6202 that was fitted with the first-for-RNZAF ‘bent’ air refuelling probe. But the real purpose of the flight was something else – this was also the first flight for NZ6202 for about four months after some fairly major work had been undertaken to repair damage to the aircraft. How did this damage happen?

The pilot flying NZ6202 at that time  was firing the twin 20mm Skyhawk guns at Raumai range when he felt a ‘thump’, after which he saw the red ‘unsafe’ light illuminate in the undercarriage selection handle. He immediately aborted the sortie and returned to land at Ohakea. After landing it was found there had been an explosion (of the oxygen) in the gun bay (located in the right-hand wheel-well) and a flash fire had spread inside the bulkhead along the leading edge of the right wing.  Twisted metal, charred paint and burnt wiring in the flash-fire area of the Skyhawk meant a big job ahead for the maintenance crew in the Hangar. That aside, this unfortunate incident could easily have resulted in the loss of an aircraft.

The irony was that on an earlier Air Officer Commanding’s (AOC’s) annual inspection of RNZAF Base Ohakea, probably done around late 1972, the AOC himself (Air Cdre ‘Mo’ Moss) noted that both the oxygen and nitrogen  bottles were of the same size and colour (but the nitrogen bottle had a black band around the top). So, in order to avoid the possibility of any confusion, ‘Mo’ said maybe someone should paint one set of bottles in a different colour. But, ‘maybe someone’ didn’t get the message so the bottles weren’t painted and the young armourer proved that ‘Murphy’s Law’ prevailed – “Anything that can go wrong will go wrong”.

Anyway, the Test Flight I did showed the clever blokes in the Hangar had repaired Skyhawk NZ6202 to their usual excellent standard.  The new ‘bent’ air-to-air refuelling probe became the subject of a different debate..…..!